The 2018-19 UK Quizbowl season got off to a great start this autumn, with six tournaments keeping fingers on the buzzers over the course of October and November. From novice tournaments in Warwick, London and Glasgow, to the brain-melting CHAT in Cambridge, quizzers of all levels of experience from across the country fought it out in pursuit of the powers and the glory (and of course the book prizes). 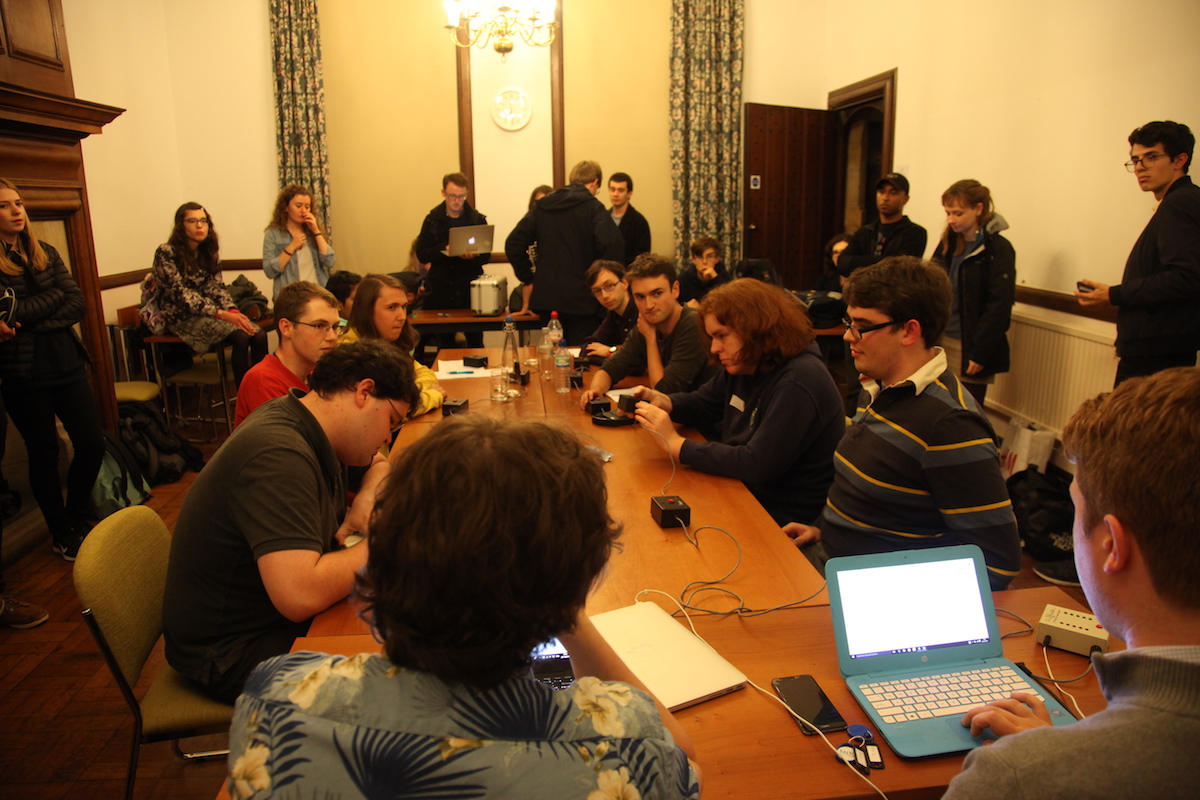 A showdown between Southampton A and Oxford A.

The season kicked off with Oxford Autumn Open, on the 13th October in (you guessed it) Oxford. Aimed at recent graduates and seasoned open circuit players, it was run on the Early Fall Tournament set head-edited by University Challenge winner Joey Goldman. After all six teams had played each other twice, Old London Town were top of the rankings, but the play-off system meant that they lost the final to The Electric Gigolo. UKQB treasurer Daoud Jackson took the coveted top-scorer position, closely followed by George Charlson and Mark Grant, a Brain of Britain and Only Connect champion with multiple top-10 finishes at the World Quizzing Championships.

The following weekend, on the 20th October, Oxford continued the fun with the Oxford Autumn Tournament, this time posing the EFT questions to student teams. On the same day, Edinburgh hosted the Scottish edition of the tournament (EMOAT). OAT and EMOAT provided a great opportunity for student teams to shake off the summer cobwebs, and some fine quizzing was seen at both sites. 12 teams from Oxford, Oxford Brookes, Cambridge, Southampton, Imperial and Warwick played in Oxford; in Scotland, eight teams with players from Edinburgh, Glasgow, Durham, Dundee, Strathclyde, Queen’s Belfast, Heriot Watt and Cambridge went to battle. In Oxford, Oxford A were triumphant, with Evan Lynch (Southampton A), Joseph Krol (Cambridge A) and Ben Beardsley (Warwick A) putting up the highest individual points totals. In Edinburgh, meanwhile, Glasgow A emerged victorious, with Dan Arribas (Glasgow A), Matt Booth (Edinburgh A) and Jack Pollock (Strathclyde) taking the top 3 individual spots. For a blow-by-blow breakdown of the tournaments, click here. 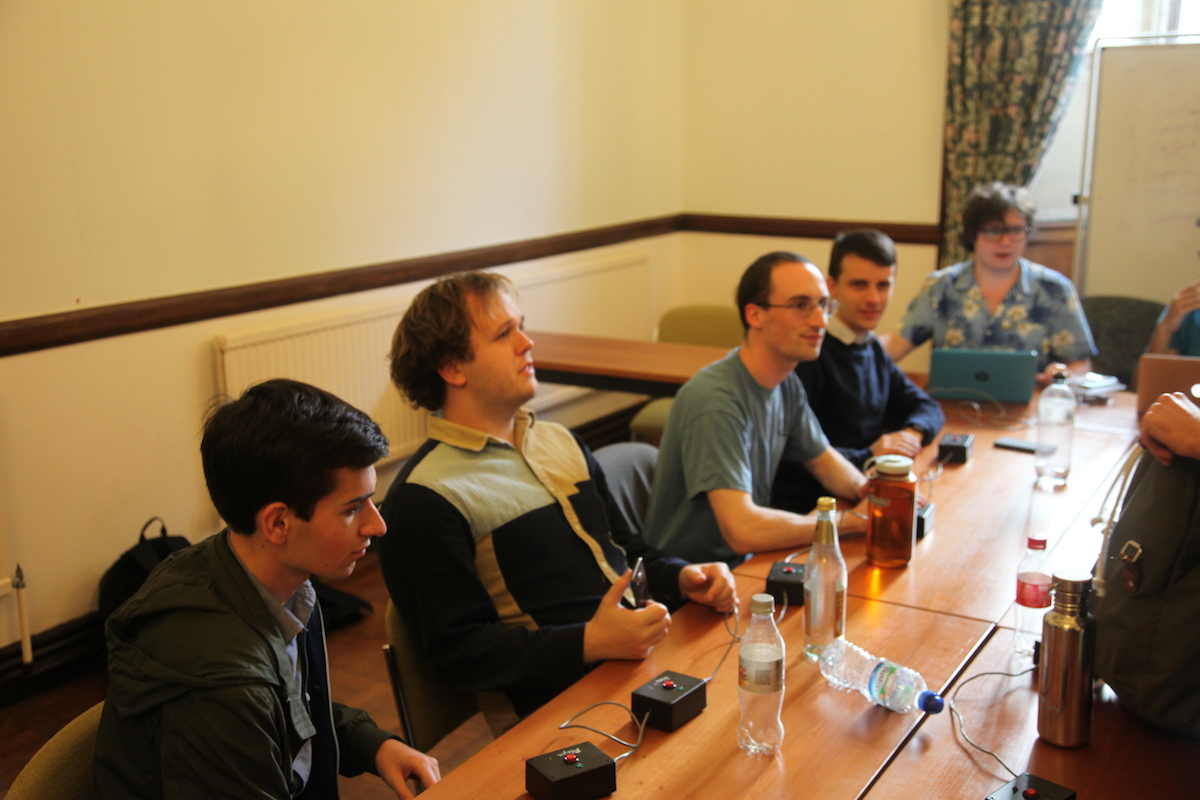 Cambridge A at Oxford Autumn Tournament.

The next place we headed was Magdalene College, Cambridge, for the Cambridge Hard Autumn Tournament on the 27th of October. CHAT was the most challenging tournament of the term, and was played on the Penn Bowl set, produced by the University of Pennsylvania. The tournament gave experienced players and societies a chance to see how they stacked up against each other — with Cambridge A emerging the winners, edging out grad team Quizbowl Will Never Die, But You Will. On Sunday 28th, the WORLDSTAR side-tournament provided some further very difficult internationally-minded quizzing — with arguably the best buzz of the day coming when Theo Tindall powered Kyrgyzstan from the name of the street he used to live on in Bishkek.

Then it was off to Coventry for the Warwick Novice Tournament on the 3rd November. The tournament was played on the ACF Fall set, with editing from the UKQB team to make it suitable for a British audience — many thanks are due to Evan Lynch and Frances Clark-Murray in particular, who corralled an editing team at short notice. ACF Fall has always been a highlight of the season, and this year was no exception. Eight teams from Oxford, Cambridge, Warwick and Michigan (!) took part — the latter team a solo effort from Conor Thompson, who took the chance to sample the British quizzing waters while studying abroad in Switzerland. Conor ended up top-scoring the prelims, with second place going to Barney Pite of Oxford A and third place to Eli Hong of Cambridge B. Even the might of Michigan could not stop Oxford A from stealing the win overall, however — they sealed their victory by beating Cambridge A 395–140.

Next up was the second edition of the British Novice Tournament, held in two locations at Imperial College London and the University of Glasgow on 17th November. The tournament was intended as a way for new quizzers to gain experience, and for University Challenge teams to practise playing together. The questions were written by quizzers from Southampton all the way up to Glasgow, overseen by UKQB tournaments supervisor Evan Lynch. The universities involved were Oxford, Cambridge, Oxford Brookes, Imperial, Southampton, Warwick, Edinburgh and Glasgow, as well as two combined teams: Chimera from Oxford Brookes, Oxford and Cambridge, and Miscellaneous from Glasgow, Strathclyde and Dundee. In Glasgow, Miscellaneous won the day, defeating an all-star team in an exhibition final. The top scorers of the day were Jack Pollock of Strathclyde, and Freya Whiteford and Cam Herbert of Glasgow. In London, meanwhile, Oxford Brookes stormed to their first ever tournament win, with a titanic performance from Kirsten Etheridge in the final against Chimera. The overall top scorers were Ruaridh Forgan and Nick Wise of Cambridge, and Alex Hardwick of Oxford. For more details, have a look at the report from the day.

Lastly we headed down south for the Southampton Hard Autumn Finale Tournament on 24th November, which used questions provided by UCSD, and provided a challenging but fun way to end the term. Nine teams of students and open circuit quizzers entered the fray, with Old London Town emerging the clear winners, winning every single match they played. Playing on home turf clearly helped Evan Lynch, who was the top individual scorer, followed by Joseph Krol (Cambridge) and Daoud Jackson (Old London Town). To find out more, read Ronny Jackson’s entertaining account of the day.

And so we retired to bed — but only for Christmas, because spring is on its way and with it, a freshly hatched batch of tournaments. Keep an eye on the blog for tournament announcements — no matter how much experience you have, we’d love to have your university come and join us in 2019.